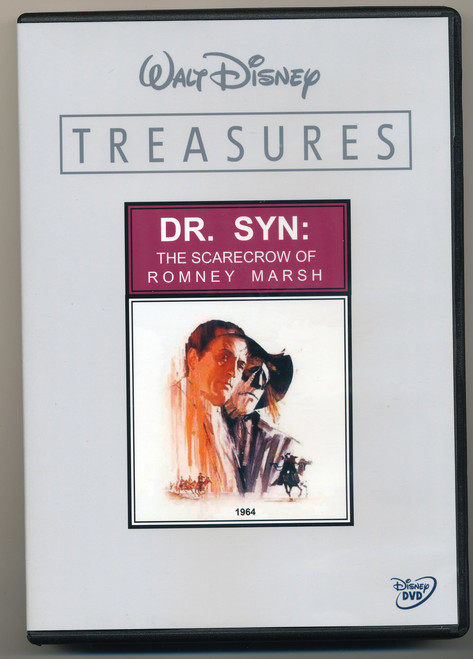 You will receive the DVD as pictured.

Out of Print. Can be found, only in the tin version, but very expensive.

Dr. Syn: The Scarecrow of Romney Marsh DVD Synopsis and Information: This two-disc DVD set captures all the magic of the original airing on TV in 1964 and the later release of the movie as a feature film for the UK audience. Both versions are a treasure to watch, and the film itself is considered one of Disney's greatest TV movie triumphs.

Dr. Syn: The Scarecrow of Romney Marsh 1964 DVD has terrific music, story and action. The film follows the unique tale of Dr. Syn, played brilliantly by Patrick McGoohan. Dr. Syn is a priest by day and a pirate called Scarecrowala Robin Hoodat night. McGoohan seamlessly drifts back and forth between both characters and has you believing you’re seeing two completely different people. His soothing and caring voice as the priest differs vastly from his broken glass vocals for the Scarecrow…simply astounding!

With the widescreen video transfer and all the supplemental material, this is a wonderful DVD set to own and cherish. Be sure to share this treat with someone who has not had the privilege of experiencing the Walt Disney version of the classic Dr. Syn: The Scarecrow of Romney Marsh on DVD for a revisiting of old-school yet wonderful TV programming.

Dr. Syn The Scarecrow Of Romney Marsh DVD is a classic Disney epic you can watch again and again.

Features:
Featuring exclusive introductions by film historian Leonard Maltin, this is a timeless collection from generations past for generations to come. Also includes interviews with several film historians in an all new featurette, specially made for this Special Edition DVD set ! ! A spectacular home video release by Disney for this classic Made for TV Actioneer. Flawlessly directed, shot and acted.

Disc 1:
The three original episodes, exactly as they appeared on the Disney TV show The Wonderful World Of Color in 1964, complete with introductions and excepts from Walt Disney himself! Includes documentary.

Disc 2:
The entire three episodes edited together, without any interruptions, to play as a full length feature film! Includes documentary.

DVD Contains Full Menus, Chapters & Features Of The Studio Release unless otherwise stated. This title is very rare, out of print and has NO FUTURE RELEASE DATE pending.

The Best of The Price is Right (4 Disc Set)