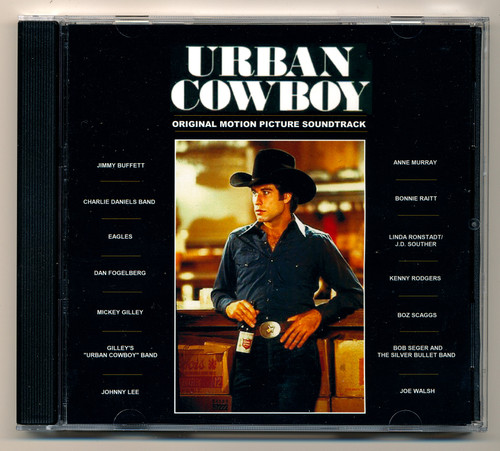 The aim was to do for country what Saturday Night Fever did for disco. The result was that bars from Kona to Kalamazoo suddenly had mechanical bulls, and slickers walking around in cowboy hats. You might also pinpoint this as the moment in time when "country" music suddenly went cosmopolitan, paving the way for Garth Brooks. Johnny Lee's "Lookin' for Love" was one of the decade's biggest singles, and this album briefly made a star of Mickey Gilley (whose Texas club provided a home for that alpha bull). Fans of Bob Seger, Jimmy Buffet, the Eagles, Dan Fogelberg, and Bonnie Raitt may want this collection for the tunes they lack elsewhere. And it sure recalls an era.

The film featured a hit soundtrack album spawning numerous Top 10 Billboard Country Singles, such as #1 "Lookin' for Love" by Johnny Lee, #1 "Stand by Me" by Mickey Gilley, #3 (AC chart) "Look What You've Done to Me" by Boz Scaggs, #1 "Could I Have This Dance" by Anne Murray, and #4 "Love the World Away" by Kenny Rogers. It also included songs that were hits from earlier years such as #1 "The Devil Went Down to Georgia" by the Charlie Daniels Band and "Lyin' Eyes" by the Eagles. The film is said to have started the 1980s boom in pop-country music known as the "Urban Cowboy Movement" also known as Neo-Country or Hill Boogie. In December 2018 the soundtrack was certified triple platinum by the RIAA for sales of three million copies.

The Partridge Family Bulletin Board