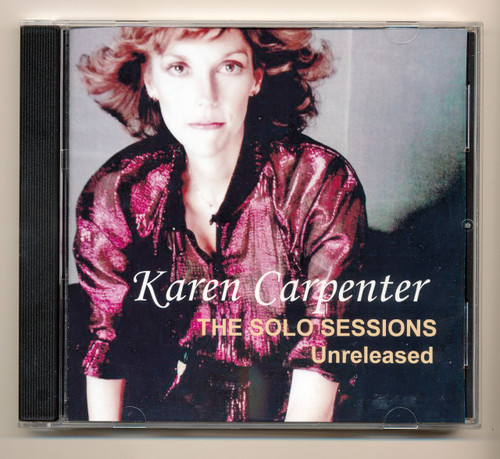 KAREN CARPENTERS NEW YORK UNRELEASED SESSIONS CD. Karen Carpenter recorded a solo project with record producer Phil Ramone in 1979. On the album for the solo project titled Karen Carpenter you got to hear Karen's voice for the first time in a different manner than on any other Carpenters records, but the album wasn't released until after Karen Carpenters death in 1983. In 1996, only 12 of the songs from the solo project were released. Now you have the opportunity to hear the 10 other songs that remained in the music vaults from the solo project with Phil Ramone. Like the other songs on the solo album, these 10 songs on this CD show Karen exploring many musical styles. Included on this CD Are Karen singing Martha Reeves big hit "Jimmy Mack," Cher's "Love Makin' Love To You," and Vicki Sue Robinson's "Don't Try To Win Me Back Again," "Something's Missing," Keep The Lovelight Burning," Midnight," I Do It For Love," Truly You," Last One Singing The Blues," and "It's Really You." Limited Supply.

The Partridge Family Anthology Season One

The Partridge Family Anthology Season One